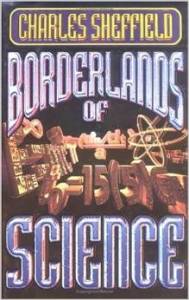 “We’ll soon be capable of creating a simple virus. Within fifteen years of completing the Human Genome Project we’ll create life—cellular life.” The stuff of science fiction? Yes, but also an assessment of the current state of biology by Dr. Charles Sheffield. The award-winning author of over forty novels, non-fiction books, and story collections straddles the worlds of science and science fiction with ease. Looming large in each, Sheffield has served as past-President of both the American Astronautical Society and the Science Fiction Writers of America (organizing the latter he likens to “herding cats.”) In his newest non-fiction venture Borderlands of Science: How to Think Like a Scientist (and Write Science Fiction) published by Baen, Sheffield combines the roles of scientist and fiction writer. The book surveys the current state of physics, chemistry, and biology and how they can be applied to such favorite science fiction topics as the beginning and ending of the universe, space flight and colonization, alien biology, computer and robot design, cloning, immortality, and future war among others.

Sheffield follows in the footsteps of such greats as Isaac Asimov and Arthur C. Clarke in bringing true scientific sensibility to science fiction, but it wasn’t an obvious career path. He was born in England and earned a Ph.D. in theoretical physics from St. Johns, Cambridge. “I read science fiction as a youth,” Sheffield says. “We all did. [Clarke’s] Childhood’s End really affected me. But after becoming a model of respectability, I dropped science fiction completely.” He went to college, met and married the woman of his dreams, had two children, and moved his family to the U.S. to pursue mathematical studies just as the space race heated up between the U.S. and the Soviet Union. Sheffield found himself in the middle of the U.S. space program examining the effects of the Moon’s gravitational field on the motion of spacecraft.

Writing fiction came as a challenge and escape. “I had no intention of writing science fiction, or, indeed, fiction of any kind.” Sheffield tells the story of how, during an unplanned layover at the London airport, someone gave him Larry Niven’s Ringworld. “I thought, ‘Hey, this is good stuff, I didn’t know stories like this were still being written.'” When he returned to the U.S., he combed the bookstores, and found “a lot of sludge, occasionally well-written but mostly content-free. I then had the dangerous thought ‘I could probably write something as bad as this myself.'” He tried and the rejection slips piled up. Sheffield became obstinate. “I swore I would write until I had sold three stories, just to prove I could write, then I’d go back to the mundane world of large government projects and management meetings.”

It would be pleasant to say that stubborn streak was the beginning of Sheffield’s prolific writing career, but recently he admitted there was a darker second catalyst. In 1976, his wife Sarah was diagnosed with colon cancer and died a little over a year later. During her illness, he stayed up late writing fiction to escape tragic reality. “For years I couldn’t talk about Sarah’s death,” Sheffield says, “then I started using it in stories, and now I can finally talk about it for real. People, who read about it on my site, e-mail me and tell me how they can see my past in my writing. I didn’t even know I was doing it, for the most part. But I have never since that first year been so compelled to move to imaginary worlds.”

Luckily for us, Sheffield kept writing and finally got acceptances from Galaxy, Amazing Stories, and Analog among others. Along the way he won the 1991 Japanese Sei-un award for best science fiction novel (The McAndrew Chronicles), the 1992 John W. Campbell Memorial Award for Best Science Fiction Novel (Brother to Dragons) and both the Hugo and Nebula for his 1993 novelette Georgia on My Mind.

He also married fellow science fiction award winner and writer Nancy Kress. They share a home and maintain separate writing spaces in Bethesda, Maryland. “We have to be very disciplined. The plan is we go to our separate studies about 8 or 9 a.m. and write until early afternoon, when we’re allowed to talk to each other. If I’m involved, I might keep writing much longer. I tend to be a binge writer; I write when I feel like it. When Nancy went to teach at Clarion for a week, I wrote 35,000 words. Today’s a nice day, so I might take time off to plant some gladiolas.”

Like many writers, Sheffield’s past and present passions do show in his work. Physics and its applications take up significant space in Borderlands. “The work in quantum physics and particularly the experiments with entangled electrons and teleportation is some of the most intriguing coming out of the scientific literature these days,” he says. In his book, Sheffield reviews the results of an experiment where two electrons are “entangled” at the quantum level, but physically far apart, allowing something done to one to instantaneously affect the other. Later he shows how we could theoretically “beam” a human being from one location to another – it isn’t as easy as it looks on Star Trek.

“I believe we’re entering the Age of the Small in both physics and biology,” Sheffield predicts. “Within a decade we’ll unlock the secret of aging. The social consequences of this will be enormous.” And makes for fertile ground for the science fiction writer. Throughout Borderlands, Sheffield points to the edges of the unknown as opportunities for writers. Computers are in their infancy. “There seems to be no practical limit to computer speed in the foreseeable future and quantum computers are theoretically possible.” Nanotechnology, tiny, self-replicating, programmable machines that could build structures, repair human tissue, and create food from non-biotic components, are also ripe for fictional exploration.

Sheffield admits in his introduction that by its very nature Borderlands is out of date because science evolves at such a rapid rate. He urges people who want to keep up to scan the science journals or read Science News. Sheffield makes his own contribution through his syndicated column, also called Borderlands of Science covering “any topic that interests me.” But he warns that science shouldn’t be the end all of a story. “Science fiction should take the science to a personal level and show how it affects individuals. Hard science did dominate my early stories, but I’ve always liked plot and think it’s important. Lately my stories are more character driven. Maybe I’m getting mellow as I age, but I’m much less interested in the global and more in the personal.”

Author’s Note: Dr. Charles Sheffield died of a brain tumor in November 2002. He is sorely missed by his family and colleagues. For a moving tribute by Roger McBride Allen click here.