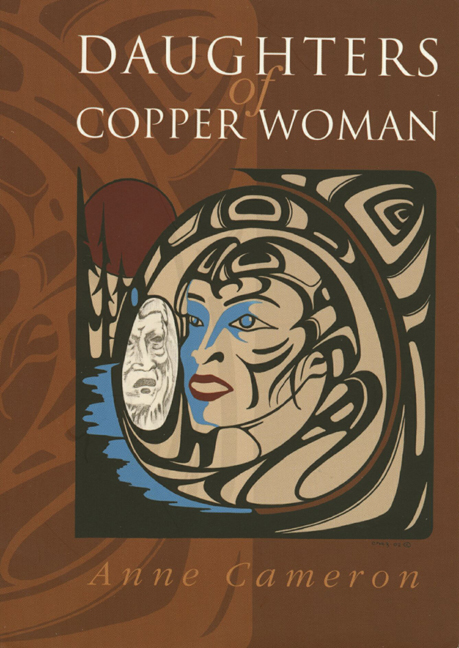 From the opening story “Copper Woman”: 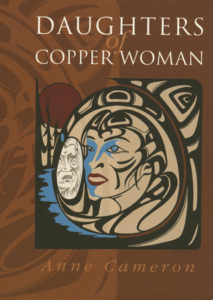 And then the Creator, who is neither male nor female, man nor woman, but both, and something more than either…took the shells of the sea and the minerals of the rocks and fashioned a skeleton…took the salt water of the ocean and made from it blood…took handfuls of dirt and on the skeleton fashioned a body, which was then encased in skin, made from the skin of the Creator and the same color as copper…she became First Woman, she became Copper Woman.

Sometimes a book grabs me by the heart and won’t let go. Daughters of Copper Woman is one of those books. I’ve been fascinated by myths, legends and folk tales since I was small. I devoured the children’s books about Greek myths and quickly moved on to Norse legends and Grimm’s tales. For the most part I enjoyed them as adventure and hero stories filled with fantasy, but (except for fables) little in the way of morals or values. I have an informal collection of the classics, plus books from the Middle East, Africa and Asia. Knowing my passion, it’s not surprising my daughter gave me this book for Mother’s Day.

My question: “How the hell did I miss this book for the last thirty-two years?”

First published in 1981, Daughters of Copper Woman is a wonderful retelling of myths and history through the voices of elderly First Nations women from the American Northwest. The author Anne Cameron is of Celtic descent, but lived close to the reservation on Vancouver Island and chronicled their tales in this book and its sequel Dzelarhons: Mythology of the Northwest Coast. Copper Woman is considered an underground classic and has sold over 200,000 copies, in many languages, world-wide.

The origin story of Copper Woman (above) goes on to explain how the first male was made from snot when Copper Woman cried from loneliness, but he was incomplete and incapable of learning and all his sons were lesser creatures. A female spirit had to take on the form of a man to mate with Copper Woman’s daughter to create men who could learn and do as much as the women. That story tickles my feminist spirit and sense of fun. The first true men—according to the Nuu-chah-nulth people—had two mommies! But that was typical of the Nuu-chah-nulth people whose family structures were expansive and flexible, providing a strong foundation for the entire community which was taxed to its limits. In the voice of Old Woman:

But the stories go far beyond Copper Woman and Snot Boy (yes, she uses that name). Many are told in the voice of “Granny” a stand-in for all the old women who shared their stories with Cameron. These histories are set up with typical scenes and background from their modern lives. The announcement over the radio that the red tide affected a certain cove prompts the tale of the first white men who arrived on their shores. The “Keestadores” bring rape, murder, disease and—worse of all—a misogynist religion. The People—both women and men—go to heroic efforts to expel them from their lands, but we already know from history that they win a few battles, but lose the war. I loved the clever framing of these beautifully written stories which illustrated the compassion of a community as it cared for its own.

Whether telling myths of Wolf Mother, stories of travelling to “the Big Island” (Hawaii), or chronicling the government sanctioned destruction of their tribal system, this book is filled with wisdom, love and community spirit. They are tales of tribulation, endurance and triumph over adversity. They articulate a set of values about respect, love and caring for each other and the environment that struck a deep chord in me. Granny has some wonderful lessons for people in this greedy material world. Lessons that, if followed, would enrich all our lives, not just the few. Here are some of my favorite passages:

Just because you inherited ownership, didn’t give you the right to mess up a place. And if you didn’t take care of it, you could lose it….Having ownership just meant having responsibility. You’d been chosen, you see, your whole family had been chosen, to look after and take care of something.

A woman could come to the circle as often as she needed, but the circle wasn’t there to encourage a woman to only talk about her problems. The first three times you came with the same story the women would listen and try to help. But if you showed up a fourth time and it was the same old tired thing, the others in the circle would just get up and move and re-form the circle somewhere else. They didn’t say the problem wasn’t important, they just said…it was time to stop talkin’ and do somethin’.

A warrior woman had to be able to recognize the face of the enemy or she couldn’t be a warrior woman. Anyone who just dithered around like a muddlehead and didn’t do anythin’ about her problems would have her warrior headband taken away….Women are recognizin’ the enemy. Women are lookin’ for the truth. Speakin’ to young women, tellin’ them that rape isn’t anythin’ at all to do with love or even with lust, tellin’ them it’s just another way for some people to convince themselves they’ve got power, any old kind of power. Women are learnin’ to use their bodies again, learnin’ to defend themselves again and speakin’ the truth.

This book is much more than a collection of myths, legends and folk tales and unlike any collection I’ve yet to read. The wisdom is timeless and the call for action timely. Women have made progress in the last thirty-two years, but—as the current religious/political climate shows—we’ve still got a long way to go. Cameron did all everyone a huge favor in sharing these stories with a wider audience. I want to make it clear, that although I consider myself a feminist (and proudly claim the label) these stories appealed to me on a human level—they lay out a set of universal values that we can all share: women and men; people of all races and ages.

Many, many thanks—and love—to my own daughter for giving me this gift. A final piece of poetry from the book, taken from the chapter “The Face of Old Woman”:

When we learn to come together we are whole

When we learn to recognize the enemy

we will know what we need to know

to learn how to come together

to learn how to weave and mend.

In the darkness of the storm she is watching