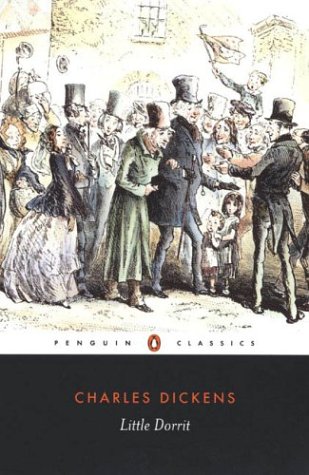 Every now and then, I turn back to the classics and remind myself why they are “classic.” Charles Dickens has always been a favorite of mine, but I had never read Little Dorrit. I picked up a Wordsworth edition (over 800 pages with introduction, preface and footnotes) which sat on my “To Be Read” shelf for several months before I plucked up the energy to tackle it. Once I started, I couldn’t put it down.

The story is simple: a few good souls struggle with fate’s decrees, society’s vagaries, fools and evil-doers to find “a modest life of usefulness and happiness.” Oh, but what innocent souls, twisted evil-doers and delicious fools! There’s a reason why “Dickensian” is applied to certain well-drawn characters. Dickens saw deep into the heart of humankind and had a wonderful facility for bringing people to life in lush eccentric detail. Amy Dorrit, as the titular character, is tiny in size, but huge in impact. She’s gentle, giving, industrious and the emotional bulwark of her family and friends. In spite of being born and raised in a debtor’s prison where her gentleman father was incarcerated for over twenty years, Little Dorrit is beloved by all who come to know her. Arthur Dennam is a man entering middle age and haunted by a secret he suspects and his mother won’t divulge. He’s an honorable man and wants no one hurt on his behalf. But he falls into the trap of denying his emotions and settling for less than he’s worth.

But evil-doers and fools are where Dickens excels. Dennam’s mother is a dried up, bitter woman, twisted by a strict religion and her own pain. Dickens says of her that she is guilty of reverse creation—creating a judging, wrathful god out of the dust of her own image. Mr. Merdle (with a name eerily similar to the French word for human excrement—merde) is the Bernie Madoff of his day; running a financial ponzi scheme that eventually brings down great and small alike, collapsing several financial institutions. He never speaks for himself, but all of society marvels at his genius for making money and can’t resist investing for the “fourteen percent”:

“The famous name of Merdle became, every day, more famous in the land. Nobody knew that the Merdle of such high renown had ever done any good to anyone, alive or dead, or to any earthly thing…All people knew (or thought they knew) that he had made himself immensely rich; and, for that reason alone, prostrated themselves before him.”

An ocean of Barnacles encrust the ship of state in Little Dorrit and they, allied with the aristocratic Stiltstockings, make sure nothing of any value gets done by parliament or bureaucracy. There are also murderers, innocent lovers, social climbers, treacherous and virtuous servants, grand society matrons and tobacco sellers. All are dissected; their virtues and flaws laid bare by Dickens’ skillful scalpel.

One of his most delightful inventions is the Circumlocution Office, mostly run by the aforementioned Barnacles and Stiltstockings, whose sole purpose is to tie up any creative enterprise or invention with so much red tape that it is smothered out of existence. They hone and perfect the art of “How Not to Do It” (in more modern terms “How to Do Nothing.”) Dickens includes a chapter entitled “Concerning the Whole Science of Government” which illustrates his frustration with gridlocked government and ineffectual financial regulators.

Aristocratic society comes in for its share of sharp wit, as well. Mrs. Merdle, whom Mr. Merdle married to further his place in Society, is most often referred to simply as “the bosom” upon which she displays her wealth as a sign of power. The Barnacles, Stiltstockings and Merdles live in “inconvenient houses smelling of yesterday’s soup and carriage horses” because it is a fashionable street. They all bitterly denounce any politicians who compromise with “the mob”—anyone not aristocratic, no matter how wealthy or educated. The middle class and poor receive a few licks for their tolerance of upper class airs and their fear of “foreigners.” The following passage could describe many a modern American’s attitude towards immigrants.

“It was uphill work for a foreigner, lame or sound, to make his way. In the first place, they were vaguely persuaded that every foreigner had a knife about him; in the second, they held it to be a sound constitutional national axiom that he ought to go home to his own country…In the third place, they had a notion that it was a sort of Divine visitation upon a foreigner that he was not an Englishman, and that all kinds of calamities happened to his country because it did things that England did not, and did not do things that England did…They believed that foreigners were always badly off…They believed that foreigners were always immoral…They believed that foreigners had no independent spirit, as never being escorted to the poll in droves by Lord Decimus Tite Barnacle, with colours flying and the tune of Rule Britannia playing.”

Written in 1855-1857, this is a darker story than Dickens’ earlier ones. It still deals with social justice, individual responsibility and governmental accountability; but the satire is crisp, biting and surprisingly relevant to a modern reader. Prisons—physical and mental—and the corrupting influence of money are reoccurring themes. In earlier stories the bad guys get their comeuppance and the good guys retire into moderate wealth and idleness. In Little Dorrit, the good guys are “happy and blessed” in their choice of service to their family and friends. But several of the bad guys and all the government and political institutions are little changed by the end; reflecting Dickens’ frustration with the scandals of his times. In the Preface, Dickens answers his critics who claim he overly exaggerated several aspects of government and financial wrong doing [brackets are my inserted comments]:

“If I might offer any apology for so exaggerated a fiction as the Barnacles and Circumlocution Office, I would seek it in the common experience of an Englishman, without presuming to mention the unimportant fact of my having done that violence to good manners in the days of a Russian War and of a Court of Inquiry at Chelsea. [The investigation highlighted the many shortcomings in the government and military prosecution of the Crimean War.] If I might make so bold as to defend that extravagant conception Mr. Merdle, I would hint that it originated after the Railroad Share epoch, in the times of a certain Irish bank, and of one or two other equally laudable enterprises.” [Financial speculation in railroads with boom and bust cycles plagued the 1840’s. The Tipperary and Royal British Banks collapsed in 1856, ruining many small depositors.]

In summary, if you’re looking for a meaty read, you can’t go wrong with Little Dorrit. Borrow it from the library, download it free (it’s in the public domain), or pick up a cheap paperback. It’s well worth your time to revisit a classic author and see how little things have changed in 150 years. Enjoy!