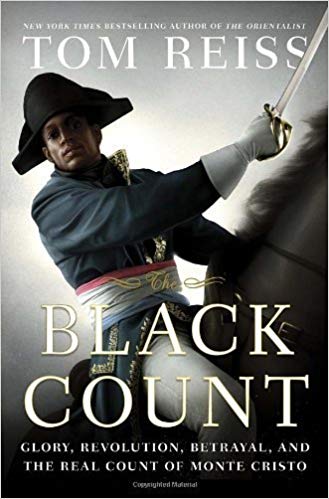 Glory, Revolution, Betrayal, and the Real Count of Monte Cristo by Tom Reiss

Blurb: “The Black Count is the remarkable true story of the real Count of Monte Cristo – a stunning feat of historical sleuthing that brings to life the forgotten hero who inspired such classics as  The Count of Monte Cristo  and  The Three Musketeers.  Hidden behind these swashbuckling adventures was an even more incredible secret: the real hero was the son of a black slave — who rose higher in the white world than any man of his race would before our own time.  The Black Count is simultaneously a riveting adventure story, a lushly textured evocation of 18th-century France, and a window into the modern world’s first multi-racial society. But it is also a heartbreaking story of the enduring bonds of love between a father and son.”

The Count of Monte Cristo, The Man in the Iron Mask, The Three Musketeers, all enduring staples of adventure fiction. They’ve stood the test of time and proudly wear the title “classic.” Who knew the stories were based on the life of the author’s father, a remarkable man born to a minor French noble and a slave woman on the island of Saint-Domingue (Haiti)?

This book won the 2013 Pulitzer Prize for biography and richly deserves it for introducing us to the inspiring story of a man who went from slave to General in the French Revolutionary Army. Born Thomas-Alexandre Davy de la Pailleterie; by the time he joins the army, he rejects his father’s name and title (Marquis de la Pailleterie) and takes his slave mother’s name–Dumas. His dispatches from the front are signed simply “Alex Dumas.” He rises through the ranks from private to General and is Commander of the Calvary in Napoleon’s disastrous Egyptian campaign. His adventures and battles are a compelling story all by themselves. But Reiss gives us much more.

While many of us may know the basics of the French Revolution, and some have studied the gory details, this book gives us a new angle. General Alex Dumas reached his pinnacle through his own intelligence, perseverance, personal bravery, and ambition. But he would not have been allowed to during any earlier time in European history. The French who fought in the American War for Independence came back to France with a revolutionary spirit and a thirst for equality–not only for themselves, but all Frenchman, free and slave. They were the first country in Europe to not only abolish slavery, but also to grant full rights of citizenship to “men of color.” Free black men voted in assemblies, studied in elite French academies, fought in integrated military units, and rose to positions of authority and command in the military and government. This expression of egalite and fraternite lasted until Napoleon took power and (with the rich planter class backing him) reversed all those hard-won freedoms and rights.

The third layer to this book is the enduring and loving relationship between the General and his son (who eventually became the novelist Alexandre Dumas). Reiss begins and ends his book with General Dumas’ death and the impact it had on his four-year-old namesake. Throughout the book, he illuminates the real life adventures that inspire the boy, many years later, to immortalize his father in fiction. What I found most sad was that it seemed the son suffered much more harshly for his race than his father. Raised in poverty (Napoleon withheld Dumas’ pension after he died), denied a good secondary education, and taunted by racial epithets during his literary career; Alexandre Dumas rose above all to create enduring and beloved fiction. His martial father would have been proud.

A good biographer presents his subject in the context of the times with lively and engaging writing. Reiss delivers with a well-documented book that pulls at the heart strings while giving us a window into European race relations of the late eighteenth/early nineteenth century and the true stories behind some of the best adventure fiction written. Highly recommended.

Tom Reiss is an author, historian, and biographer whose work resurrects the lives of brilliant outsiders and rebels in times of global upheaval.

His most recent book, The Black Count: Glory, Revolution, Betrayal, and the Real Count of Monte Cristo, won the Pulitzer Prize and the PEN Award.

He is also the author of “The Orientalist: Solving the Mystery of a Strange and Dangerous Life,” a finalist for the 2006 Samuel Johnson Prize, and Führer-Ex: Memoirs of a Former Neo-Nazi, the first inside exposé of the European neo-Nazi movement.

His books have been translated into more than 35 languages. Before he supported himself with his writing, Tom worked as a hospital orderly, small business entrepreneur, and an actor in Japanese gangster movies.

Watch Tom Reiss discuss his book in the three videos below: