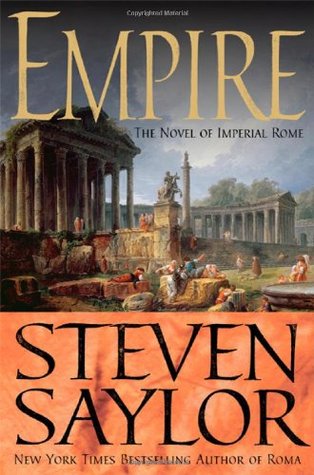 “Empire: The Novel of Imperial Rome” by Steven Saylor 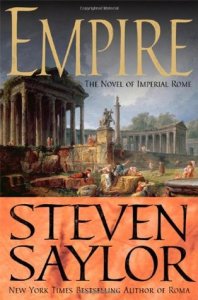 Empire:The Novel of Imperial Rome continues the story of the Pinarius family chronicled in Steven Saylor’s earlier novel Roma: The Novel of Ancient Rome. In the earlier book, we followed the aristocratic family from the founding of Rome through the Republican years. Empire picks up at the end of Augustus’ reign and concludes at the end of Hadrian’s, covering about 130 years and four generations of Pinarii. Saylor sets himself a Herculean task to cover the major events and people of the times in an entertaining and accessible way using a formula perfected by James A. Michener in his historical epics. He mostly succeeds.

Each “chapter” of the book covers a different Pinarii generation and varies in the quality of the story telling and character development. The first chapter is the briefest at 68 pages and seems to exist solely for the purpose of filling in a bit of Roman back story before Lucius, the main character and his family are banished to Alexandria, Egypt. Lucius, we hardly knew ye! And from what little we do know, Lucius seems to be a pleasant, but dull, man. Augustus and his wife Livia make a brief appearance, Tiberius retreats to his island, and the evil Sejanus throws a mild scare into the family. Hardly the stuff of epics. The most interesting character in this section is Claudius who seems to step from the pages of Robert Graves‘ book I, Claudius with his stammer, limp, and almost feral ability to keep his head down and off the chopping block.

Things pick up after that. The remaining three chapters are much longer and Saylor does a better job of developing the characters, both his fictional and historic ones. The most interesting relationship is that of Titus (in the second generation) with Nero. Saylor does an excellent job giving us insight into one of Rome’s most complicated and misunderstood emperors. So he had his mother assassinated, kicked his pregnant wife to death, and couldn’t sing very well…Nero had an artist’s soul and a vision for Rome after the great fire. And Titus is instrumental in achieving it, after nearly losing his life in one of Nero’s “entertainments.”

My least favorite Pinarius is Lucius (of the third generation) who spends his life depressed; doing nothing but staying out of sight of the various emperors who reign during his long life—primarily the lesser known Flavians, Vespasian and his sons Titus and Domitian. He is Saylor’s vehicle for introducing these fascinating emperors and meeting some of Rome’s famous philosophers and writers, but has almost no substance of his own. Lucius is slightly redeemed with a tragic love story with one of the very few women characters in the book who had anything resembling a personality. The other “woman” character who gets some space and sympathy is actually a cross-dressing eunuch that everyone refers to as “she.” From my own researches, I know Roman women were very involved in politics, arts and trades. Lucius has three sisters, but we never see them or even learn their names. Too bad. They may have been more interesting than their brother.

Where he falls short on character development, Saylor excels with the historical details. The pitfalls and snares of various emperors and their courts are rendered in chilling detail. Not only the details of politics and religion; but fascinating facts on food, clothes, architecture, and fire control are deftly slipped into the story. As a reader, I could picture myself walking down the streets flanked by magnificent marble temples, smelling the smoke of Rome burning, feeling the heat of the sand in the arena. His description of what it was like to be in the audience of the Flavian Amphitheater (a.k.a. the Roman Coliseum) was one of the best I’ve ever read. Ditto the building scenes in the fourth chapter as Marcus Pinarius helps build Trajan’s Column and renovate the Pantheon. Saylor obviously did his homework and it shows.

Except when he is describing something, Saylor’s writing is workmanlike. My particular peeve is the “As you know, Bob…” lecture chunks—usually at the beginning of a chapter or section following a time jump—in which Saylor has his characters describe events they already know about, in order to bring the reader up to speed. The worst case is at the beginning of a section starting in A.D. 80 when a character cries to a friend, “What a year, what a terrible, terrible year!” and then proceeds for the next page and a half recounting the disasters they both had lived through. Most readers won’t care, but as a writer, I’ve had it drummed into my head that use of “As you know, Bob…” is a lazy way to write.

In summary, I found Empire a mixed bag; lots of credit for covering such an epic time period with accuracy and interesting detail, points off for uneven character and story development, and an average grade for writing craft. I’d recommend this book to people who want to get an overview of the time period in an interesting way. Folks who are already steeped in the events and historic characters might find the book frustratingly shallow. I’m not faulting Saylor, so much as the format. Multi-generational epics are notoriously hard to write with any depth. Kudos to Steven Saylor for his effort.

Books set in the Roman period discussed on this website :